Natural Resources are not the main source of African growth: Services and Digital

Contrary to popular beliefs that natural resources are the main source of growth, natural resources only accounted for 26% of Africa’s growth, whilst 40% of that growth was generated by consumer goods and services as a result of the rise of the urban African consumer.

Today, 40% of Africans live in cities, a proportion that is close to China’s and continuing to expand. The continent already has 52 cities with populations greater than 1 million—equal to Western Europe—and is projected to add 32 more by 2030. As in other developing economies, urbanization in Africa is creating jobs, boosting productivity, and lifting incomes.

The number of households with discretionary income is projected to grow by 50% over the next 10 years, reaching 128 million. Africa’s workforce will become the world’s largest by 2040, with 1.1 billion workers, ahead of both China and India.

While other regions in the world have to deal with legacy infrastructure that is costly to maintain and transform, Africa is nearly starting from scratch and can directly establish better and cheaper infrastructure.

Mobile telecommunications transformed Africans’ access to telephones, increasing penetration from less than 1% to more than 50% over 30 years. Telecom firms have signed up more than 400 million new mobile-phone subscribers in Africa since 2000,more than the total US population.Mobile generated 6.7% of Africa’s GDP and 3.8 million jobs in 2015.

Many operators in the region recorded data traffic growth of more than 50% in 2015. As a result, data revenue as a share of total revenue is rising rapidly across the region, reaching 15% on average but considerably higher for mobile operators in the more advanced markets such as South Africa and Egypt.

This digital transformation for Africa has paved the way for African industries to leapfrog. For instance, M-Pesa a Kenyan company has become a global leader and innovator in mobile banking, which substantially improved financial inclusion in Africa. Today, Africa accounts for 52% of the 271 live mobile money services in 93 countries and 64% of all active mobile money accounts.

Similar effects of digital transformation are possible across many other industries in Africa, including electricity, distribution, education and healthcare, thanks to modern digital infrastructure and adoption rate by Africans that provides Africa with a comparative advantage to other regions in the world.

This digital transformation has caught the eye of international investors. Across the region a Silicon Valley inspired network is developing. We have identified the existence of more than 200 African innovation hubs, 3,500 new tech related ventures, and $1 billion in venture capital to a pan-African movement of start-up entrepreneurs.

MFC’s digital transformation team, led by Hussein Abdel Karim, whose previous role was as a founder CEO for Rocket Internet ventures including Jumia, is at the forefront of mobilizing capital for African digital technology entrepreneurs. We are confident that the digital industry will generate several billion dollar companies in Africa over the next 5 years. 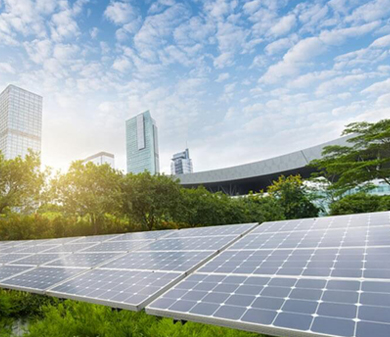 Increasing awareness regarding the benefits of a society’s access to electricity forced African economies to encourage solar energy deployments, resulting in unprecedented growth.